Apparently my old editor and SHARKNADO director Anthony C. Ferrante  hasn’t yet learned his lesson, and was kind enough to invite me back to talk about THE X-FILES and weaponized babies in this latest episode of AssignmentX pop culture podcast, THE POP SHOW.

It was a lot of fun do to, and great to visit freinds old and new,  Sonia Mansfield,  Peter Brown and Ryan Mitchelle.

I join old friends Anthony C. Ferrante,Sonia Mansfield and new friends Peter Brown and Ryan Mitchelle to talk about the passing of David Bowie, the best movies of 2015 and Oscar Nominations on AssignmentX‘s pop culture podcast, THE POP SHOW. 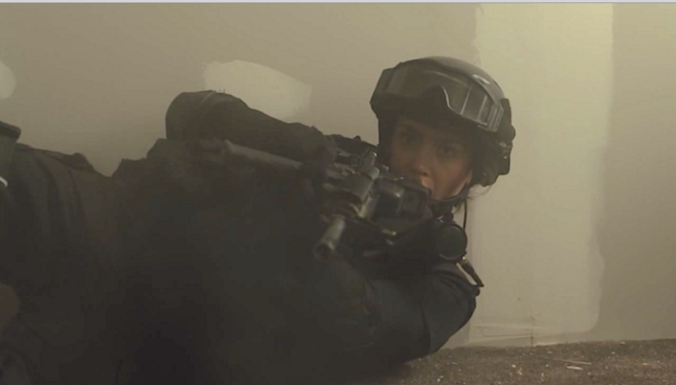 Sometimes you have the experience of hearing nothing but good things about a movie whose trailer left you cold. People you trust say it’s great. The trailer, which before the hype looked generic and rote, suddenly seems like it’s something more interesting.

So you open your mind to the possibility that a hidden gem has been discovered. And then you watch it and discover your initial indifference was probably right on the mark.

Having now scene SICARIO, I find myself wondering what all the hubbub was. Or perhaps it’s that I’ve already seen CHINATOWN.

Watching this was having the strange sensation of seeing great directing, great acting, interesting performances put to almost no good purpose.

I have to say I really ended up disliking Emily Blunt’s character.

Her character didn’t go through much of a transformation from her by the book frustration when first meeting Josh Brolin’s character, even after all of the horrors she ended up experiencing.

She was still intent on blowing the whistle, even after she realized the level of difficulty they were dealing with was of a whole different order than she understood from her previous work.

I found her to be a strange mirror of Tom Cruise’s character A FEW GOOD MEN. Upstanding, committed to the rule of law, leery of officials who go outside of the strict lines to get a job done.

But unlike Cruise, who was holding higher-ups accountable in a time of peace (when there extreme tactics were obviously overkill), she was working through a time of horrific war and still lecturing those around her about staying strictly legal.

But that’s a plot way of examining how her character did not seem to change all that much. From a storytelling aspect, it was weirdly inert.

She didn’t seem to be truly affected by what she encountered. I had a hard time empathizing with her when I was being affected by the implications of what she saw, and she seems trapped in her beliefs, like somebody who wanted to remain willfully naïve.

I have a difficult time empathizing for people burying their head in the sand as the world changes around them.

Feel like arguing about this? Come over to my Letterboxd page and let’s fight. Or, if you only have time for 140 characters, find me on Twitter at @JettJergens

The phenom that is STAR WARS continues to roll over all pop culture in this week’s edition of AssignmentX‘s pop culture podcast, THE POP SHOW.

It was fun to talk over the Golden Globes, THE FORCE AWAKENS and more with Anthony C. Ferrante,Sonia Mansfield and Peter Brown and Ryan Mitchelle.